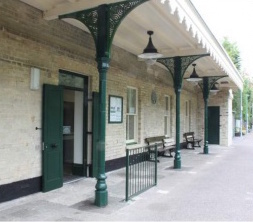 History of the East Suffolk Line

In November the Alde Valley Suffolk Family History Group had their first afternoon talk of the winter, when they met in Aldeburgh Community Centre for the first time. They had 29 visitors out of a total attendance of 56: whether the attraction was the venue, the fact that it was in the afternoon rather than the evening, or the subject matter of the talk – Bob Webb’s “History of the East Suffolk Line” – we don’t know, but Bob was certainly worth coming for.

He told us how the line’s rural background differed uniquely from those serving the great industrial areas further north. When Garretts went to the Great Exhibition of 1851 they took their exhibits by boat, and saw how easily their competitors and clients were able to transport theirs by rail. The Earl of Stradbroke, as owner of the turnpike road north from Darsham, quickly saw the value of using the railway for agricultural purposes, and joined with Sir Samuel Morton Peto to create the East Suffolk Line, which opened in 1859. Fellow investors were local landowners, many of whom were former slave-owners who had received large compensation payouts when slavery was abolished. The line was used for transporting fish from Lowestoft docks to London, eggs from Framlingham, and malt and coal to the maltings at Snape. One downside of the quick and easy carriage of goods was the spread of brucellosis due to the movement of unpasteurised milk.

As well as transporting agricultural goods, the railway enabled the Victorian seaside holiday boom, transforming our fishing villages into coastal resorts: indeed, Thorpeness Halt was built purely to service the holiday village created there in the early 1900s.

Railways forced standardisation of time with the creation of a universal timetable, and allowed rapid expansion of the use of telegraphs: Lord Ullswater, Speaker of the House of Commons, who lived at Campsea Ashe, was constantly sending telegrams from Wickham Market station to Parliament.

The railway was much used during World War One to convey the mustered troops to battle, and to bring the wounded back on special hospital trains to the military hospitals which had been established in many country houses such as Henham Hall and Easton Park. And the railway was used by the German Zeppelin bombers as a navigation aid – they followed the line – so air raid warnings could be telegraphed ahead to the next station down the line.

In the Second World War the railway carried evacuee children to Saxmundham station, and later, American airmen to and from their base at Parham: their bombs and ammunition also came in by train.

Bob concluded his talk by telling us about the project to bring the station house at Wickham Market station back into use: it will contain a digital exhibition on the history of the East Suffolk Railway, and provide new facilities and services that you can read about on http://www.stationhousecampseaashe.co.uk .