As announced in Newsletters 44 (for April 2019) and 45 (June), we have been lucky to acquire, from an old surveyor's office, over 250 flat Ordnance Survey maps of Suffolk, almost all at a scale of 25 inches to the mile (1:2500).  To put this scale into perspective, a typical medieval church appears about half an inch long by half a centimetre wide, and (remarkably for an essentially metric scale) one square inch represents almost precisely one acre.  The County requires around a thousand maps, so our coverage is obviously quite patchy, but it IS biased towards eastern Suffolk, and to our Alde Valley area in particular.  Our maps are listed on our Index.  [We later acquired just over 100 more maps, mostly out-of-County, then a further 30 Suffolk maps from a local museum that were surplus to them — our duplicates and out-of-County maps were successfully offered in June/July 2020 "free to a good home".]

"The Ordnance Survey 25-inch-to-the-mile County Series (1841-1952) is immensely valuable for local history.  It is the most detailed Ordnance Survey mapping for most parts of England and Wales.  Only urban areas with a population of over 4,000 people were mapped in more detail.  The maps allow practically every feature in the landscape to be shown.  They provide good detail of all buildings, streets, railways, industrial premises, parkland, farms, woodland and rivers.  Their bold style, and informative symbols and abbreviations, allow easy interpretation for a wide range of uses." ©

We also have about 120 of the later Ordnance Survey National Grid Plans series (1944-1991) — which gradually replaced the County Series — at the same scale, but aligned instead on the familiar OS Grid References that had been introduced around 1936.  Our maps are limited to the 1960's and 70's.  These sheets are smaller than the earlier series, at 35" wide x 23" high (close to size A1), covering an area of just 2km (1¼ miles) west-to-east ("along the corridor" ) by 1km (0.6 miles) south-to-north ("up the stairs" ).  They are numbered using their Grid References (which in the eastern half of Suffolk are prefixed "TM"), so the geographical sequence runs broadly south-west to north-east.  Again, some 30 of our sheets are of the Alde Valley.

There are also about two dozen OS National Grid 1:1250 Plans of Ipswich and Felixstowe, covering just 500m square, and sized 19¼" wide x 12½" high, rather smaller than A2.  We also acquired nine OS 1 inch to 1 mile Map (7th Series) Index of National Plans sheets covering an area bounded approximately by Lowestoft, Peterborough, Luton and Clacton: these are filed behind the Waveney maps (as explained below).

In June 2021, we received (ultimately from the Estate of Sir Basil Eddis of Aldeburgh) four OS Six-Inch Suffolk Sheets dated 1928 — for coverage, see the foot of this webpage.  In the July, we also took care of some 20 (mostly not OS) Snape Archive (SNA) maps (including tithe maps) on indefinite loan from the Suffolk Local History Council (SLHC) Recorder for Snape — residents of the village can have viewings arranged in Snape on email request.

From 1974 until April 2019, Suffolk was divided into seven districts — Babergh, Suffolk Coastal, St Edmundsbury, Forest Heath, Ipswich Borough, Mid Suffolk and Waveney.  Apart from Ipswich Borough, they were of similar geographical size, so it makes sense to sort the maps by pre-merger district — except that we have split the maps for the former Suffolk Coastal District (which of course they pre-date!) between those within and outside the Alde Valley, as we hold rather more of them.

The maps are filed in map-cases, usually one or two cases per pre-merger District, whilst the Alde Valley has three.  The cases are now in the map-chest in our Help Centre, in the order A - B - C - E and F together - IP - M - W, matching the initials underlined in the previous paragraph.  Within the cases, the maps are sorted by size with the smallest at the front (so nominally A2, then A1 and A0); and then (except for Ipswich) alphabetically by place-name.  Be aware that, because of the maps' scale, rural parishes usually spread across more than one, and often we have maps only for outlying parts, not for the main village or its church.

Exceptionally, the modern Ipswich maps are sorted by the first four characters of the postcode (such as "IP4 2"), and then the road or neighbourhood name.  Most simply and broadly put, postcode area IP4 covers the north-east of the Borough, bordered by Henley Road, Northgate Street, Stoke Bridge (in the docks area) and Foxhall Road — whilst IP1 is the north-west and the rest of the town centre, IP2 is everything south of the river and IP3 is Gainsborough, etc. in the south-east.

The map-sheets are stored in the map-chest in our Help Centre, and are available to view whenever it is open — on first and third Saturdays from 10:00 until noon.  We also have several folded maps of our area, as either genuine OS maps or other map-printers' reproductions, at a variety of scales.

☞ The easiest way to view online an early County Series map overlaid against its modern equivalent is to click here, then click on "georeferenced layer', and finally type a placename in which you're interested.  You can slide the blue button to "change transparency of the overlay" to ease matching with the present day.

All the maps appear in our Index (downloadable via our Downloads page), so are as ever ordered by county (=Suffolk, apart from two for Dedham in Essex), then alphabetically by place-name, then item-title.  To help you find the maps you want, the Index spreadsheet has three extra jobsheets/pages, just for the FLAT maps:
OS25_CHEST, lists maps in map-chest order (exactly as tabulated above, so by District, then by size (≈A2/A1/A0), then alphabetically by place =cols. C Λ/F V/D Λ);
OS25_MAPNO, lists them in map-number order (as included within the item-titles in column E), so broadly geographically in west-to-east strips across Suffolk; and
OS25_ALPHA, lists them in alphabetical order of "Parish" (column D) across the whole of the County, so by place-name/neighbourhood — just as in the main Index.

A few maps are indexed under more than one community / "Parish", if that is considered helpful — for example, Aldringham and Leiston (south).

The thumbnail-maps below indicate the 25" maps we hold for the Alde Valley (in BLOCK CAPITALS) and adjacent parts of the former Suffolk Coastal and Waveney Districts (in Mixed Case).  The map on the right covers a smaller area than the map on the left — for example, see the relative position of Dunwich. 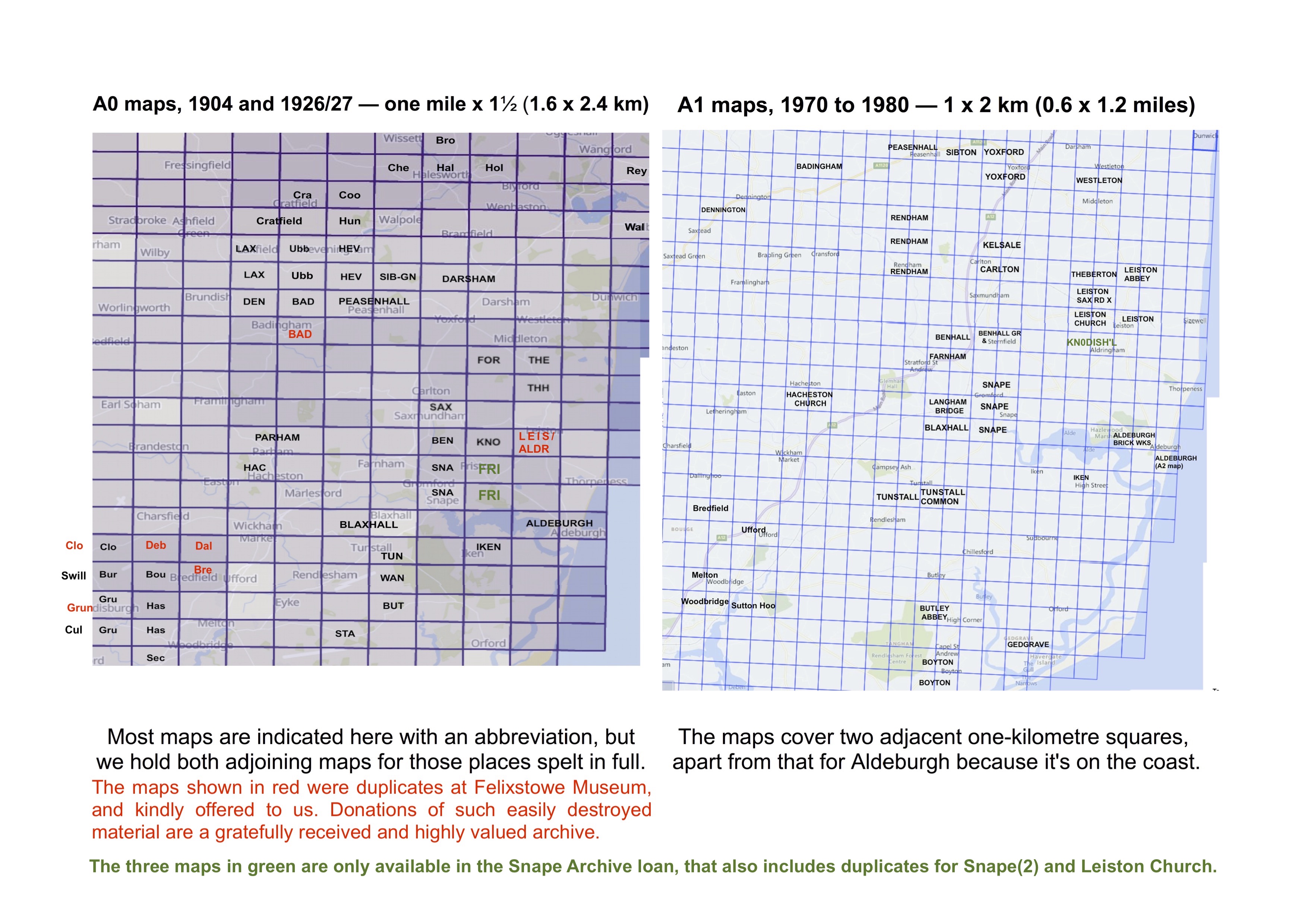 To determine National Grid mapping — https://suffolkmoths.co.uk/OSMap/OSmap_10k.php?grid=TM46 (covering much of the same area)
or indeed (for eastern Suffolk) most values between grid=TM03 and grid=TM59.  Out of interest, visit grid=OV00 !

The four original maps, outlined in yellow below and filed in map case A1, were donated from the Estate of the late Sir Basil Eddis of Aldeburgh.
The fifth map, outlined in green, is a reproduction that we have bought in, so that together they cover a consistent area.
The Minsmere map is annotated in manuscript with the borders of RSPB Minsmere and the National Trust's Dunwich Heath & Beach. 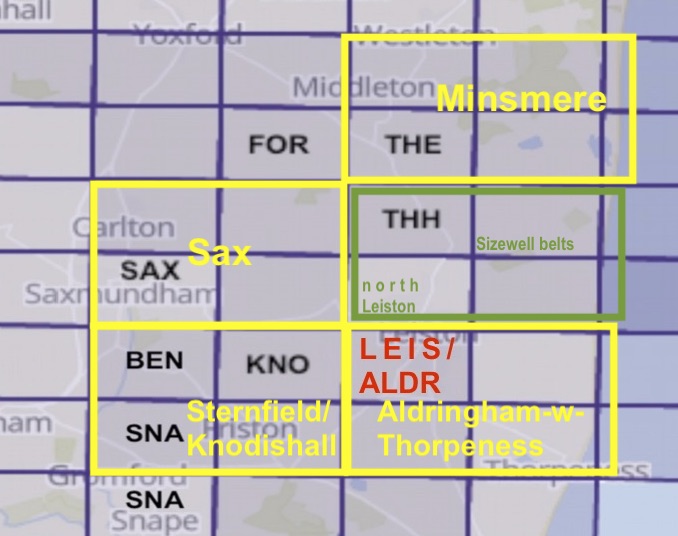 You may have realised that this is a detail of one of the pair of annotated maps above.