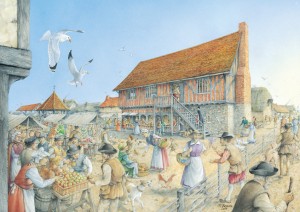 "History of Aldeburgh" by Diana Hughes

Thankfully, not a reflection of today’s tranquil Suffolk coastal resort, but a reminder of the many challenges endured by the townsfolk of ‘early modern’ Aldeburgh, spanning the years 1500-1800.  This period formed the subject of a fascinating talk, given by former teacher and local historian Diana Hughes, at our January meeting in Snape Village Hall.

Diana’s fact-filled presentation was primarily based on the original Chamberlains’ Accounts, covering the years 1566-1592 and 1625-1649, found in a hole in the wall of the council chamber in the Aldeburgh ‘Moot Hall’.  Now housing the Aldeburgh museum, the timber-framed Moot Hall was erected by the town Burgesses at a time of great prosperity and is one of the best preserved Tudor public buildings in England.

Drawing directly from the pages of the Chamberlains’ Accounts, that she has personally transcribed, Diana provided the 73-strong audience with intimate details of the historic borough’s income and expenditure, the former including ‘mooring and tonnage’ fees for ships docking at Slaughden Quay, the latter reflecting essential outlay on guns for defence at a time of threat from pirate raids or foreign invasion.

On a lighter note, we learned of the not insignificant expense of beer, a staple of life in the 16th and 17th centuries for those working in the bustling port or labouring in the fields and marshes.  Diana then told of the exploits of a talented musician, ‘Blind Harry of Badingham’, apprenticed in Aldeburgh in 1576 and so popular with the locals that the burgesses supplied him with a number of musical instruments at the town’s expense.  Often in a bid to escape the plague, travelling players also paid regular visits to the town, although we find on one occasion, in the increasingly puritanical days before the English Civil War, that a sum was ‘given to the players that they might not play’.

Perhaps the most gruesome content of Diana’s talk was found in the accounting entries relating to the exploits of Matthew Hopkins of Manningtree, known more chillingly as ‘The Witchfinder General’.  Here we learned that seven poor women upon whom ‘the finger had been put’ had once been imprisoned in the Moot Hall at Christmas time.  Deprived of food and sleep, they finally admitted to witchcraft and were sentenced to death by hanging.  Viewed from a modern perspective, such treatment seems barbaric.  However, at the time, Matthew Hopkins was seen to be doing good in rooting out evil and was paid handsomely for his services; so handsomely, in fact, that a special rate was levied upon the inhabitants of Aldeburgh to cover his expenses.

For anyone wishing to find out more about Aldeburgh’s rich history, a visit to the Moot Hall museum is highly recommended.  Residents and tourists alike will also be interested to learn that the Trustees of the Aldeburgh Museum have applied to the Heritage Lottery Fund for grant funding to —

— regenerate the Museum through a comprehensive refurbishment of the displays and exhibitions.  Specific plans include new lighting, signage, digital information aids, and a revised orientation to provide an even more rewarding and informative visitor experience.

Previous: Tales from the Parsonage
Next: "At the Overseer's Door: Suffolk Workhouses" with Ray Whitehand