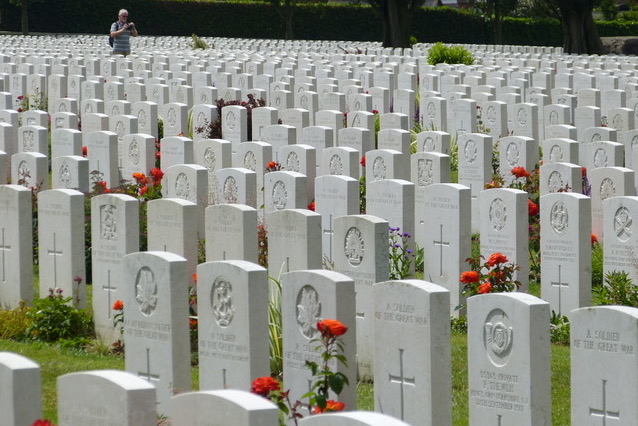 This talk was in two parts, the first explained the history behind the establishment of the Commonwealth War Graves Commission, and the second focussed on some local connections.

When WWI ended, with an estimated loss of one million fallen, there was no system in place to deal with the war dead. Fabian Ware, at 45 years old, was considered too old to enlist, but was given control of a Red Cross Ambulance Unit.  During the work of collecting the injured, he noticed the lack of organisation with regard to the war dead.  He found many soldiers were buried on or near the battlefield by their comrades, who then moved on, but without a record of who was buried and where.  Fabian Ware lobbied for his unit to record all these improvised burials leading to the establishment of The General Registration Commission in 1916.  They were tasked to search for isolated bodies/burials, to arrange for them to be transferred to concentration cemeteries and to help identify the bodies.  The establishment of this unit helped with the morale of soldiers in the field, and also families, taking comfort that the dead were not disregarded.

Who would deal with the graves after the War?  There was no official organisation to deal with the War Dead.  It was not a foregone conclusion that the government would take control of the situation.  In previous wars, such as Crimea, bodies had not been repatriated, but left in the area of conflict without official recognition other than that initiated by individual units.

In 1917 the Imperial War Graves Commission was established with Fabian Ware as it’s Vice-Chairman – their task was to care for the graves.  A working-party toured the Somme battlefield in 1917, consisting of architects Edwin Lutyens, Herbert Baker and Reginald Bloomfield, horticulturist Arthur Hill of Kew Gardens and Rudyard Kipling, to consider the establishment of cemeteries post-war.  All had different ideas as to what the cemeteries should look like.  It was agreed that headstones were to be of a simple design — a round top chosen to accommodate all religions — and Leslie McDonnall Gill designed the typeface.

After the war, the work of the Imperial War Graves Commission began.  Some families — those with wealth — began the process to locate their dead sons/husbands, with the plan to return the body for burial in a local churchyard.  This action was frowned upon by the Government who decreed that there was to be no repatriation and that the fallen would all be treated the same, regardless of rank.  There was an immediate public outcry leading to accusations of the State controlling bereavement, many were unhappy that round topped headstones were to be used instead of crosses, others protested against bodies being dug up to be placed in concentration cemeteries, and memorials to the missing were also contentious.  Women raised the most powerful protests, and many petitions were signed.

The Commission had to liaise with bereaved families around the world, to check the religion, did they want a religious symbol, did they wish to include a personal inscription?  The latter was restricted to 66 characters at 3½d per letter, the intention being to involve the family, but many could not afford the cost.  There are 229,000 personal inscriptions, many taken from literature or the Bible, as well as individual messages.  The Commission had the right to veto submitted messages.

Headstones include those from Commonwealth nations – Canada, Newfoundland, South Africa, Australia, New Zealand and India being the main ones – they all had their own national emblem engraved onto the headstone.  Different languages were used, including those of the Chinese Labour Corps.  The complication of their languages and symbols, led to the decision that only Chinese could engrave their headstones.

The Commission continues to recover bodies — about 25 per annum are discovered.  A unit exists to try to establish the name of the deceased.  If descendants are located, they are given the opportunity to provide a personal message on the headstone.  The deceased is re-buried in a nearby concentration cemetery, with appropriate ceremony.

A recent report – "Historical Inequalities in Commemoration" – investigated if all names were accounted.  It found that many names were missed through oversight, or sometimes through prejudice at the time — particularly amongst ethnic groups.  The Commission attempts to rectify this situation, with panels being added to existing memorials to accommodate the additional names.

Stuart advised us of the CWGC Portal, its mailing list and local supporters group.  It is possible to visit and research at the CWGC Archive in Maidenhead, where they hold 10,000 files — but these mostly refer to the work of the Commission.  Information about the Fallen is mostly held at Kew.  Files relating to WW2 have not yet been released.  He also mentioned the newly opened Visitor Centre at Beaurains, near Arras, France.  The CWGC website is www.cwgc.org, which offers an excellent search-engine of those with a headstone.

The CWGC is a global organisation that employs people all over the world, e.g. 750 craftsmen and 900 gardeners are employed, to continue the maintenance of the gravestones in perpetuity.  The Commission currently costs £60 million annually, with 78% contributed by the British Government.

The second part to Stuart’s talk was to focus on CWGC headstones locally.  He mentioned Aldeburgh, Aldringham, Leiston, Saxmundham and Theberton.  From the Archives he has found letters, forms, agreements and inspection reports with the individual churches and cemeteries.  In 1962/63 there was a national exercise to exhume all the German War Dead – locally from Aldeburgh, Leiston and Theberton – to be reburied at Cannock Chase, Staffordshire.

I believe everyone who listened to the talk was moved in some way.

The Imperial War Graves Commission was the very first of the war grave organisations.  It is difficult for those of us who have become familiar with the cemeteries and memorials that commemorate our war dead to appreciate what a revolutionary idea remembrance and, therefore, the Commission was in 1917.  Nonetheless, the Commission was a pioneer and what it was doing during and in the aftermath of the First World War was extraordinary.

Never had a nation, let alone an Empire as vast and multicultural as the British Empire, attempted to commemorate all its war dead from a given conflict.  No template existed for the task of commemorating the dead on such a mammoth scale.  Everything we now take for granted, every facet of remembrance, had to be worked out, debated, costed and delivered.

The Commission, and the establishment of remembrance as we know it, is largely thanks to the vision and determination of one man.

Join us as Stuart Durrell tell us about the important work of the CWGC and its education charity, the Commonwealth War Graves Foundation.

This event is free to members ‘attending’ over Zoom, and is also available to non-members at a cost of £3.00.  If you wish to ‘attend’ please register via our website https://avsfhg.org.uk/events/book/ by 5pm on the preceding Friday and you will be sent joining instructions.   However, at a cost of £6.00 for a full year’s membership, why not consider signing up with this growing band of family history enthusiasts now?  Membership taken out after 1st October lasts until December of the following year.

This meeting was planned to be a ‘hybrid’ meeting, but the 'physical' option at Leiston Community Centre will no longer be offered, because of the COVID-19 Omicron variant.