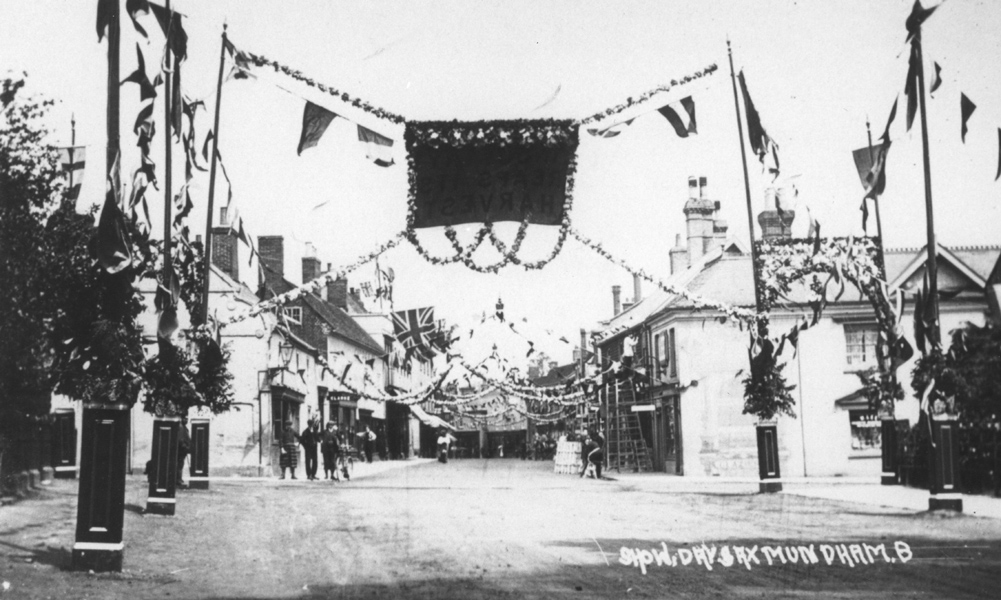 Belinda Moore’s first thought, and opening remark, was that there were at least three members present in  the audience who are featured in her book!  Amongst a packed hall was Ray Green and also Belinda’s mother, who discovered she had been at school with Nigel Turner, another AVSFHG member.  Although she had lived in Saxmundham for 20 years, Belinda was not sure if she was qualified to start writing a book about the people of this market town, but nonetheless we were glad that she did.

Her talk consisted of stories from her childhood, reminiscences about those people featured in the book, and how she came to write it, all interspersed with old photographs of Sax, many on loan from Saxmundham Museum.   It was at the funeral of Mona, the wife of one of her great-uncles, that Belinda got the idea for the book. She realised that if the old stories were not recorded, then they would be lost forever.

The Suffolk Show has been held in the town; in 1910, for which there was a photo from the Museum, and again in 1939.  Wednesdays used to be market day, with live and deadstock sales, which used to be thriving, and full of people. This was despite being only a small town with a population of around one thousand.

In 1915 John Emsden, an ancestor of Belinda’s, took the lease on the Coach and Horses public house in the High Street (no longer existing).  Belinda’s grandmother was the daughter of the son of John Emsden, who was known by all the shopkeepers, with a rather notorious reputation.   Her great uncles were also local charactres, known for story telling over drinks of whisky and tea!

The Angel pub was another well known local building, a sixteenth century coaching inn which has now been converted to residential use.

Belinda’s fear is that soon there will be no characters left and that the stories she listened to as a small girl will die out.  A writer by trade, she began with a small sample piece about Lyla Edmonds, and started researching the town to build a picture of what it was like then.  One way to begin, she suggested, is by asking friends or relatives, ‘What did you used to do on Christmas morning?’ – as for those working on farms it would be just another working day.  Indeed, some interesting stories came forth during questions from the audience.  Write down these stories, she urges, otherwise they go!

Previous: The History of Minsmere
Next: History of the East Suffolk Line