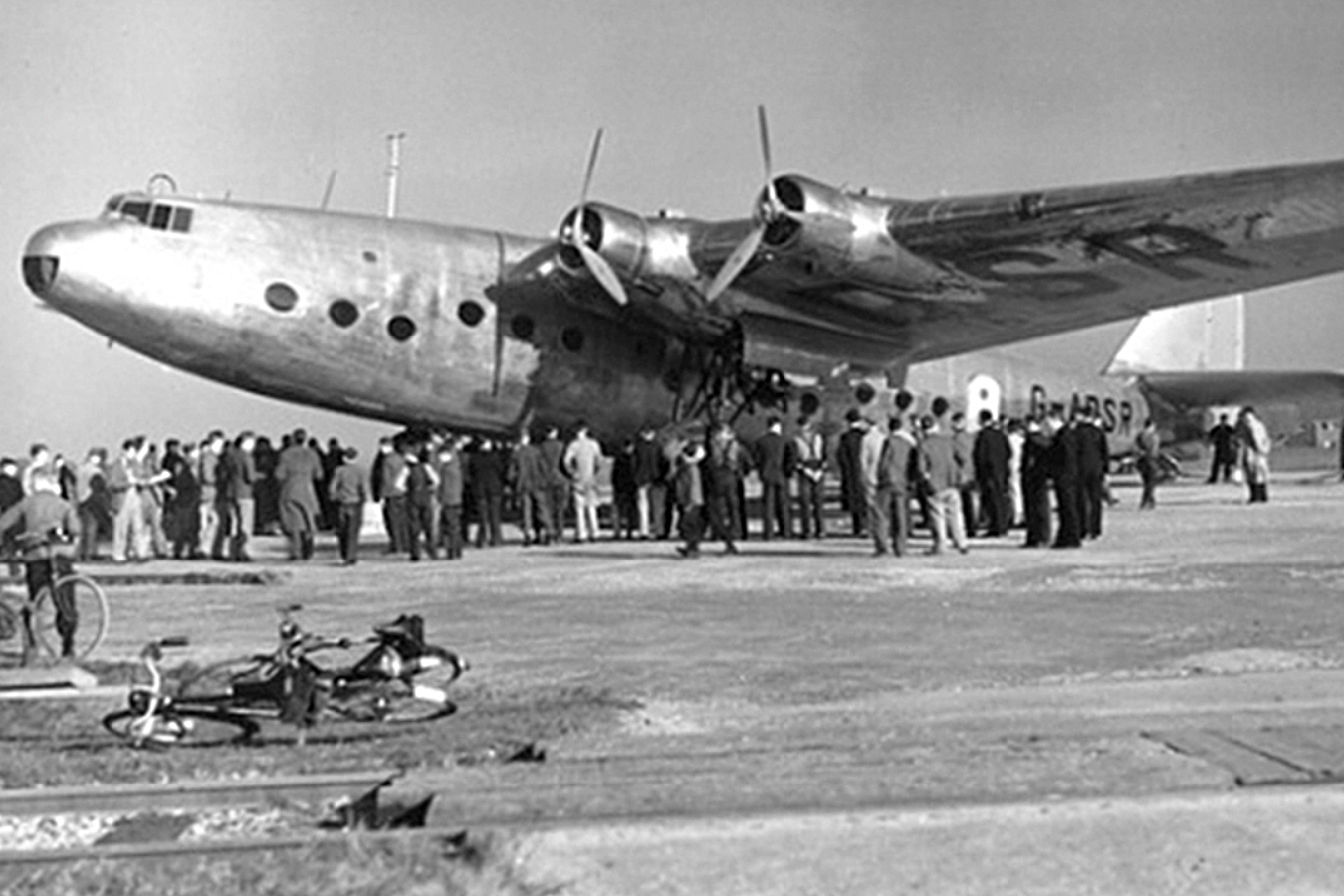 FROM THE ROYAL FLYING CORPS TO THE JET AGE – ALAN POWELL

In September, members and visitors alike enjoyed a very informative and well-illustrated talk by Alan Powell on the history of the former airfield at Martlesham Heath.

On 16th January 1917, the site was officially opened by the fledgling Royal Flying Corps as ‘The Aeroplane Experimental Unit, Royal Flying Corps’.  Aircraft were evaluated and, to a certain extent, developed at this facility, and it was the centre of aeroplane testing in the UK.  Alan was able to show us a photograph of reconnaissance staff, dating back to 1919, that included two women, one at either end of the front row.  They were known as ‘Members’.  Another photo showed (male) pilots in uniform, which bore a striking similarity to cavalry dress.

In 1920, the Air Ministry launched a competition to encourage design of civilian air transport now WWI was over.  They did not award a first prize, as many of the designs submitted were based on those of wartime bombers, but Alan showed us a photo of the interior of a civilian aircraft, which had wicker chairs for the passengers, and large windows.

Another popular event during the interwar years were Empire Air Days, held around the country, including at Martlesham, where the latest designs and aircraft would be on display.  In 1936, the airfield was visited by King Edward VIII and the future King George VI, which was again documented in photographs, showing everyone in the entourage wearing a black armband in mourning for the late King George V.

Martlesham became home to the invention of radar (at this stage merely a primitive oscillograph), under the instigation of Dr E.G. Tatty Brown.  The aerodrome was also, rather bizarrely, subject to attack by the Italian Air Force.  They were, however, easily repelled, as they were picked up on radar on their way to bomb the port of Harwich.

During the Second World War, Martlesham was then home to the 356th Fighter Group of the United States Army Air Force.  American fighter pilots would set off on their missions to bomb destinations in occupied Europe.  Playford Hall and Kesgrave Hall were used as billets for them.  An interesting note, is that Alan showed us a photo of American film star Clark Gable at Martlesham.  After nearly being killed in action, the US government successfully requested his return home, where he could be of more use in propaganda films, etc.

After the war, Martlesham resumed its research and development functions, including crash testing and the Bomb Ballistic Unit.  This studied the trajectory of bombs dropped from a Lincoln plane (descendant of the Lancaster).  This era also marked the start of the jet age, and the development of the Rapid Landing Take Off Experimental Unit.

The site was formally decommissioned on 25th April 1963, and sold to the Bradford Property Trust for a sum of £72,500.  (Some private gliding and parachuting continued into the early 1970s.) In fact, one of AVSFHG’s members, Bing Boast, said that he was one of the last people to fly from Martlesham Heath (in a De Havilland).

The Control Tower Museum is open 2-5pm on Sundays from April until October each year — see their website: www.mhas.org.uk, where you can also find more information about the types of aircraft that flew from Martlesham over the years.  They have donated stained glass windows in memoriam in the local chapel, which it is possible to visit, as are several other buildings of the old airfield.

Depending on demand we may be able to organise a group visit to the Musem.  Please let Angela Skelcher know on 01728 830949 or sec@avsfhg.org.uk if this would interest you.

The Royal Flying Corps came into being on 13th March 1912.  Martlesham Heath was opened in January 1917 to become the premier national centre for the testing and evaluation of aircraft and armaments, only nine years after the first recorded flight of a heavier-than-air machine in Britain.  In the October, the operations at Martlesham Heath were given the name "The Aeroplane Experimental Unit, Royal Flying Corps", and it has been described as "The Cradle of British Aviation".

On 1st April 1918, the RFC was merged with the Royal Naval Air Service to become the Royal Air Force, the oldest independent air force in the world.

In 1936, radar research and development (R&D) commenced at nearby Bawdsey Manor, and aircraft from Martlesham were available to assist when necessary, taking part in the first successful radar detection of ships from the air — and also fortuitously of other aircraft taking off from HMS Courageous. 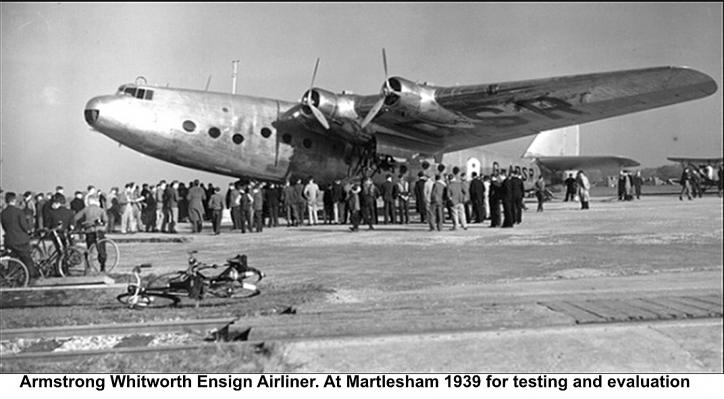 Three days before the outbreak of war, the Establishment was moved away to Wiltshire, and the station became part of 11 Group, which bore the brunt of the Battle of Britain.  Douglas Bader and Bob Stanford Tuck were separately stationed at Martlesham during 1940.

In the Spring of 1943, the 356th Fighter Group of the United States Army Air Force arrived, to escort USAAF Eighth Air Force heavy bombers on daylight raids over Europe.  RAF 56 Squadron remained to attack targets in France and the Low Countries, as well as shipping in the North Sea, which made Martlesham Heath one of very few joint Anglo-American airfields. 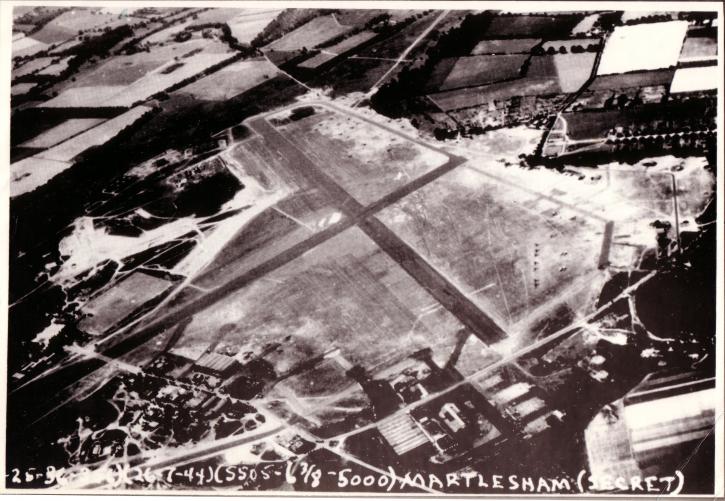 View from the north-east showing the new runways, 26/7/44

(houses in the right distance are Deben Avenue; beyond them is Kesgrave)

After the war it reverted once more to an R&D role, until that was relocated to the Royal Aircraft Establishment at Farnborough and Bedford.  With the jet-engine era, the concrete ends of the runway had been extended to avoid the tarmac melting.  Then, from 1958 to 1961, the "Battle of Britain Flight" was at the airfield — which was finally closed on 25th April 1963. 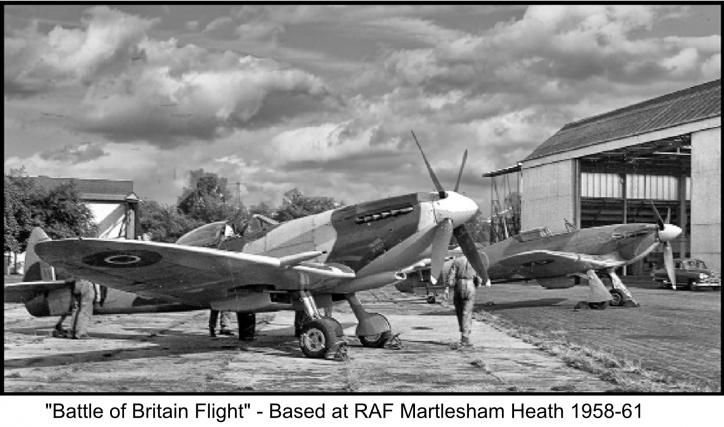