Home » events » Posted in the Past 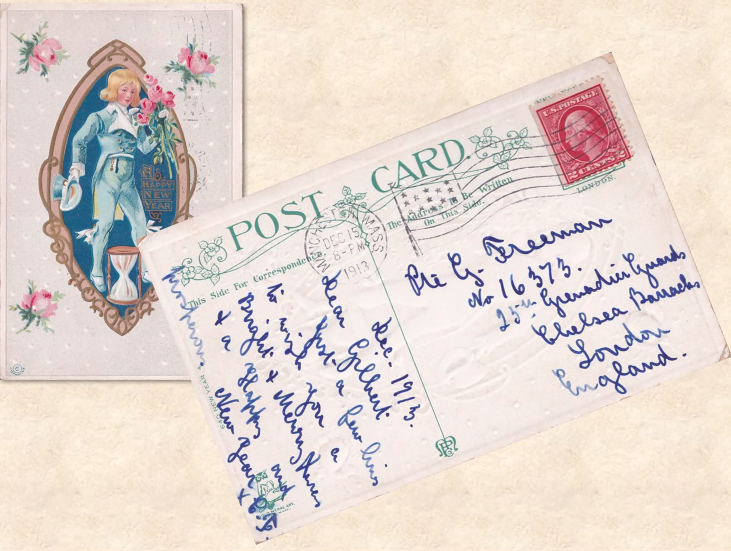 Posted in the Past

POSTED IN THE PAST
True stories on a postcard
—
Helen Baggott

Our speaker on 18th October was Helen Baggott, of the Family History Federation, over Zoom, about her investigations into the family backgrounds of senders and recipients of postcards in her private collection.

Her interest was originally prompted by a pair of postcards bought by her parents, one from the Edwardian era of the 1910s, on which she now concentrates.  She does not wish to stray into modern family history with the attendant risk of identifying those who might still be living.

Helen recounted the background of several of her postcards, but concentrated on the pair that had obviously brought her her greatest satisfaction.  The older card, sent at Christmas 1913 from Massachusetts, prompted investigation into the history of Pte Gilbert Freeman, a Grenadier Guard, stationed at Chelsea Barracks.  He was subsequently killed at the Battle of the Somme in the autumn of 1916 — with no known grave, but mentioned on the Thiepval Memorial.  The sender was Gilbert's brother Charles, who had emigrated to the States.

Gilbert's family lived in and around Freshford (near Bath), where his father William was manager of a mill that still stands.  Some time before 1911, Gilbert and some of his siblings joined his half-brother William Jr in Saltash in Cornwall, to work in his seed merchants'.  In fact the business, which later on diverted into hardware, continued to trade in Saltash into this century.

Through the Saltash Heritage Centre, who assisted Helen with the history of the Freeman business there, she was contacted by the granddaughter of Charles who sent the postcard.  On the internet, she also found a photograph (shown above) of soldiers at Chelsea Barracks, amongst whom (with help from Freeman relatives in the States) Gilbert has since been identified.

The second postcard of the pair was sent in 1927 by Dora (the younger sister of Charles and Gilbert) to their mother, who had been living for several years in Stonehouse in Gloucestershire.  Gilbert is listed on the War Memorial there.

Subsequently, Helen bought some more postcards to illustrate a talk she was to give, that quite by chance included one sent from Saltash by a "Will" to a "Mr C W Freeman" at a military camp in Minehead.  The handwriting matched William Jr's in the 1911 Census Return, the first to be completed directly by the "Head of Household", proving to be another postcard between half-brothers of the family.

Helen continued with the separate story of a father and son, both called Samuel Whitford, who were eminent Secretaries of children's hospitals.  Senior was the Secretary at Gt Ormond Street for 32 years.  Junior also worked there before emigrating to the States to take up a similar post, but curiously ended up as a gardener.

At the other end of the social scale was Emily Jones who was born in 1851, but by 1861 was already working as a laundress in Bath.  When she married in 1877, she obviously had difficulty in signing her name, and the family lived in cramped conditions near Liverpool Docks, in Burdett Street where her house still stands.  Her son William, born in 1880, is listed in 1911 as a shipping clerk, whilst his elder sister Hannah became a teacher — both beneficiaries of the 1870 Elementary Education Act.

Helen's book “Posted in the Past” is available online, including directly from her through eBay.  If you'd like to preview it, we now have a copy in our Help Centre archive.  She has also recently published a follow-up volume, “Second Delivery”.

Our October Zoom talk will be given by Family History Federation speaker Helen Baggott.

A soldier killed in the First World War, the man who helped keep the doors to Great Ormond Street Hospital open for more than 30 years, and a 10-year-old servant working for a laundress in 19th-century Bath are all revealed by messages sent using the first real social-media phenomenon of the 20th century.  Drawing on the research from her collection of more than 300 postcards, Helen will share some of the stories in an illustrated talk. 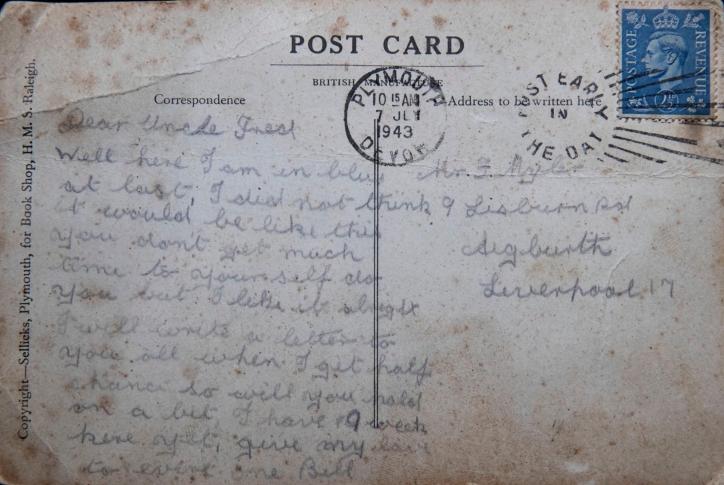 Previous: Bawdsey: Tracing WWII Relatives by Dr Phil Judkins
Next: Memories of 1946-1969, and how to record your own