The Thorpeness Wreck: a further update 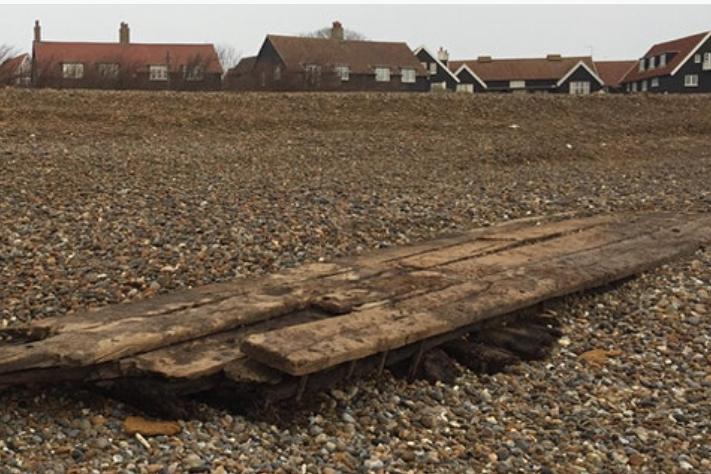 UPDATE ON THURSDAY, 11th MARCH AT 15:23
—
The story of the Thorpeness wreck continues to unfold.

People are continuing to share stories, their insights and expertise in helping us understand what caused its sudden appearance, how and when it might disappear, how might we narrow down what the ship it was and how it compares to other wrecks found along this coast.  Thank you.

We have now published an immersive beach walk, a short aerial film so you can see how the coast is changing particularly after the scouring of those North-Easterly storms.  All these can be seen at this blog:
https://www.4dheritage.com/post/beach-forensics-unravelling-the-mystery-of-a-sudden-appearance-of-a-wreck

The blog also shows a screen shot of the 3D model of the wreck and beach which can be shared online with experts and enthusiasts anywhere in the world.  There are also links to some of the press coverage – in the Smithsonian Magazine and also the BBC article which has been read by more than 100,000 people.

We also have a lesson plan for schools to go with the immersive beach walk.  As schools slowly reopen, the traditional field trip may be impossible, and we hope this experience may fill a gap until we can all go for long walks on the beach.  If any schools or young people would like to trial this and give us their feedback, it would be much appreciated.

We hope to have more insights to share with you in an event after Easter.  In the meantime, you may hear more about the wreck on BBC Radio Suffolk today or BBC Look East this evening.

Best wishes, Nicholas and the team

UPDATE ON SUNDAY, 7th MARCH
—
For those that missed the talk [last Thursday], we will be putting together ‘an immersive beach walk’.  This will take you to a website, where you can use your screen or tablet to look around key points along the beach associated with its history, and also features relevant to the wreck itself which our ‘expert witnesses’ highlighted.  You will be able to explore this and share it with family, friends and anyone else who may be interested.  There may well be follow-up events to explore some of the themes that emerged during the talk, and respond in more detail to the questions in the chat box and Q&A.

The insights and stories you heard were a fraction that I have come across as a result of so many people getting in touch following Katy Sandalls' article in the East Anglian Daily Times at https://www.eadt.co.uk/news/thorpeness-beach-ship-wreck-7324982. … This was not an event curated by some heritage institution — it was done by and for the community, but also with an audience that spanned the world, from the US to the Ukraine and Egypt.

We were delighted that some timber revealed on a Thorpeness beach should provoke curiosity around the world.  There was a particular appreciation of the different perspectives provided by the panel —

Together they helped us look more deeply, connect more broadly and think critically about the both the physical and historical evidence. …

The story continues and the conversations it has spawned — we have touched on stories and boats with local connections that have quite literally shaped the history of Britain, illustrated by the colliers that the Navy often used as expedition ships such as the "Bounty" and "Endeavour".  As Mark highlighted, the "Endeavour" has continued to inspire , illustrated by the way in which a fragment of the original ship — possibly like part of the wood on our beach, but smaller — was taken into space in Apollo 15 as a symbol of how the courage, imagination and endeavour of the past can inspire the future.

We are looking for a sponsor who can help us turn this into a series to explore different narratives, and also a programme of educational outreach for young people combining history and geography, with an introduction to the digital tools and technologies enabling us to document, share and monitor the world around us in ways never before possible.

You have maybe read or heard about the wreck that has become visible on Thorpeness beach.  It has come to the attention of Nicholas Mellor who has got an eminent group together to talk about it at a FREE online event next Thursday, 4th March at 6pm.

You can read more about the ship and the talk here.

Previous: "Who do you think you are?" by Dr Nick Barratt
Next: "Shake, Rattle and Roll" at Thorpe Ness

Facebook is also available at the foot of every page ...