Have you a plaque on your house? 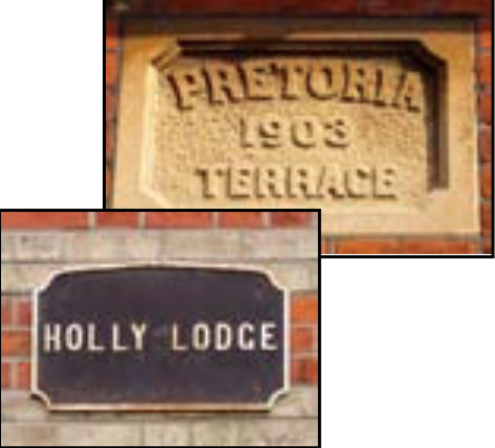 Have you ever wondered what the history of your house is?  Who lived there, or what the name plaque on the wall might mean?

We are undertaking a long-term project: to capture name plaques above properties, which appeared to be the trend around about the beginning of the 1900s. Many appeared at the top of a house in either the brickwork or in sandstone or cement, and very often include a date. In some records these were used as the addresses instead of road names and numbers – which can be a bit confusing for the researcher!

So the aim is to capture the names that appear on buildings, record them on a database, and then research the history behind them. It is hoped that this may lead to some history about the property – who lived there and what the name on the plaque means.

First of all this will be tried on houses in Leiston as it is known there are quite a number, with the aim of finding the history behind the names, such as families, builders, landowners, developers, or a celebratory event such as a Jubilee. If this proves successful then the project may be extended to cover other local villages and towns.

So if you live in a property that has a plaque, or know of one on a property, or the story behind it, please let me know, so we can try and research its history.  We would also like to photograph the plaques to keep as part of the record.

Please visit the Contact us page for my phone number.

☞  A taster of the subsequent results of the project to record Leiston house plaques can be viewed here.
Next: Some of our events in past years

Facebook is also available at the foot of every page ...

Chris's "Passion for the Past" Suffolk Archives: coronavirus arrangements Lowestoft Record Office archives move DNA for Beginners A Wartime Mystery Revealed Links for Newsletter 52 "Shake, Rattle and Roll" at Thorpe Ness The Thorpeness Wreck: a further update "Who do you think you are?" by Dr Nick Barratt Chris is on Radio Suffolk this Friday! Hidden in Plain Site A Suffolk Bevin Boy