The Alde-Ore Valley comprises a quite small rural area on the Suffolk coast — bounded broadly by Dunwich, Laxfield, Framlingham, Orford and Shingle Street — of around 180 square miles or 450 km².  Suffolk is the easternmost county of England.  Indeed, "because the UTC time zone in Europe is shifted to the west, Lowestoft  [some 25 miles or 40km north], at only 1°45'E, is the easternmost settlement in Europe in which UTC is applied"  [Wikipedia].

The red line on the map is by no means a "red line" defining our "patch", but just the barely discernible watershed of the Alde Valley, within which arbitrarily lies our main area of interest — as indeed is suggested by our name.  Some three quarters of the information that we hold (which includes census, directory and churchyard/war memorial data) relates to Suffolk, and probably a half of the total specifically to places in the Alde Valley.  So we believe that much of it is a precious, unique archive resource — and it is listed in our downloadable Index.

☞  Detailed maps of the area at various scales can be viewed, either online (see "Maps" in the A-Z section of our Links page) or
in our Help Centre (which include almost 300 old Suffolk maps — read about them here).
A few maps of the whole County are available on/via our "Old Suffolk maps" page.

☞   You can also read our potted history of the Alde Valley here. 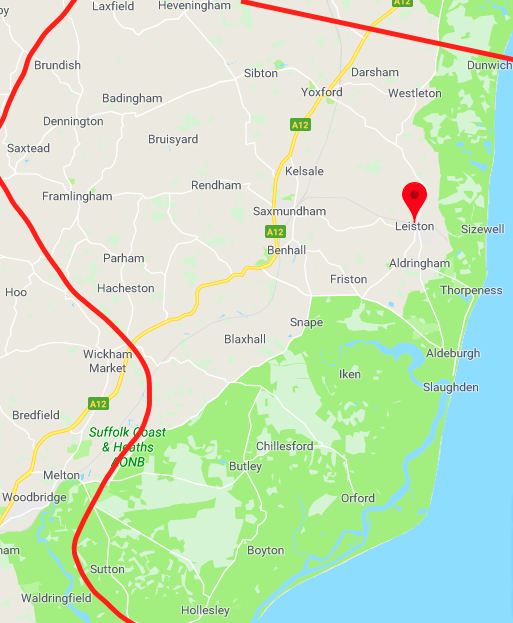 Our only towns are Aldeburgh (historically also spelt "Aldborough" or "Alburghe"), Leiston, Saxmundham, Framlingham and Orford.

⎋ The place-names in blue as hyperlinks above either link to the "Family etc. History Groups in Suffolk" page (which includes several local-community groups within the Alde Valley) or to that community's general-purpose Facebook page.

Almost all the place-names above first appear in Little Domesday (c.1086), but (ignoring hamlets, sparsely populated areas and lost villages) there are earlier dates for Rendlesham (730), Dunwich (731) and Sudbourne (c.1050); and later for Orford Castle in 1165, Eyke (1185), Iken (1212) and Sizewell (1240).  However, there is a theory that Iken's St Botolph's Church is the site of Icanho monastery, founded by Botwulf around 653 and destroyed by the Vikings in 869/870.  "The name Ycanho was used for Iken in a C14th charter of nearby Butley Priory.  The "ho" element of Icanho refers to a low spur of land projecting into a river, ... and the church at Iken is situated on just such a promontory."   ["The Archaeology of the East Anglian Conversion", p.47 – © Richard Hoggett]

Places with novel or little-known gems of history include —          Bentwaters (a former USAAF airbase, built in 1942-44);
the lost village of Dunningworth (now home to Benjamin Britten's Snape Maltings, beside Snape Bridge, but confusingly in Tunstall parish!);
Hinton (heathland near Dunwich and "real" home of Winnie-the-Pooh's friend Eeyore where "he" was seen, and then drawn, by illustrator E.H. Shepard);
Orford Ness (Europe's largest vegetated shingle spit, now protected by the National Trust);
the village of Slaughden (immediately south of Aldeburgh, in 1570 England's second biggest boat building port for boats over 100 tons, but lost to the sea);
Staverton Park and The Thicks (an important Site of Special Scientific Interest near Butley — The Park is believed to be the largest area of ancient pollarded oaks in Europe, and Staverton Thicks is known for its holly trees which are exceptionally old and tall, reputed to be the tallest in Britain).

There are also important nature reserves owned by the Royal Society for the Protection of Birds (RSPB) at Havergate Island and Minsmere — indeed the areas marked in green on the map above, broadly known as the geological "Sandlings" (formed at the foot of glaciers towards the end of the last Ice Age, and named after the "ling" or heather that is abundant), are all variously protected.  As a result of that protection, in 2020 it was reported that spoonbills are again nesting on Havergate Island for the first time since 1668.  The avocet, the emblem of the RSPB, returned to Minsmere in 1947, following deliberate wartime flooding, after an absence of more than 100 years, and numbers have continued to grow across the UK. 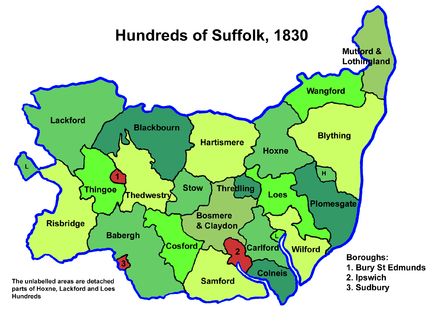 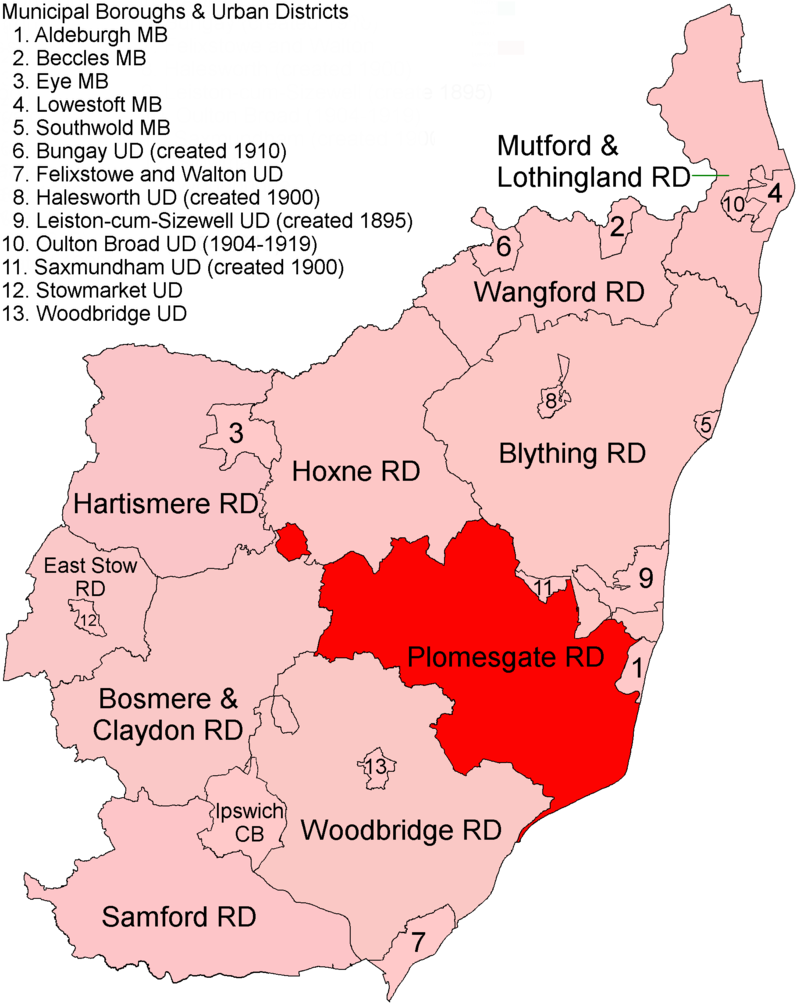 Our area contains the whole of the ancient Plomesgate Hundred (the coastal area in dark green, left), replaced in 1894 by Plomesgate Rural District (in red on the right), and then in 1934 subsumed (with our other villages in the southern wedge of Blything RD) into the new Blythe RD.  In 1974, they with Aldeburgh Municipal Borough ("1" on the map), Leiston-cum-Sizewell Urban District (9) and Saxmundham UD (11) became part of Suffolk Coastal District.  The one exception is Laxfield, near the source of the Alde towards the north-west, which is just within Mid Suffolk District.

We have two downloadable tables detailing how all those changes affected each of our civil parishes, which we hope you will find useful —
"Alde Valley local authorities (1830 to date)" and "Alde Valley Registration Districts (1837 to date)" — for which you can find links on our ⬇︎Downloads page; both tables are also on card in our Help Centre.  Equivalent maps, but for the whole County, are available via our "Old Suffolk maps" page.

Nowadays, our area comprises parts of postcode areas IP12 and IP13, and the whole of IP15, IP16 and IP17.  In April 2019, Suffolk Coastal formally merged with Waveney DC (to the north) to form the still essentially coastal-rural East Suffolk Council, the largest non-metropolitan district in the UK by population (serving a quarter of a million people), amongst the largest in England by area, and also geographically the easternmost.  It is a little over half the area of the former Ipswich-based East Suffolk County Council of 1889 to 1974 (the area of the red and pink map above right).

Incidentally, since April 2019, there has also been a West Suffolk Council district — like its near namesake based in Bury St Edmunds, but again much smaller than the 1889-1974 West Suffolk COUNTY COUNCIL, which was the whole coloured area shown on the map by clicking here.  The centre one-third of modern-day Suffolk comprises (north to south) Mid Suffolk District, Ipswich Borough and Babergh District.

Many towns and villages take part in Suffolk's Local History Recorders' Scheme, one of its joint Secretaries also being one of our members, Janette Robinson.

Other towns or villages nearby to us are Southwold, Blythburgh and Halesworth, which all lie in the Blyth Valley; also Wickham Market, Woodbridge and Bawdsey on the River Deben; and Felixstowe on the Stour-Orwell estuary.  We hold information for most of these.  There are other history groups in (or just outside) the Alde Valley serving their respective communities — and links to them (and larger not-quite-so-local groups) can be found on our "Family etc. History Groups in Suffolk" page.

☞  Detailed maps of the area at various scales can be viewed, either online (see "Maps" in the A-Z section of our Links page) or
in our Help Centre (including over 250 old Ordnance Survey 25" maps — read about them here).  You can also refer to our several other maps webpages.

We hope you find this information useful.