The Suffolk County War Memorial Roll of Honour, 1914-1918, [A2/1/4/2] has now been digitised.  Full colour digital copies of the pages in this volume recording the names of those from the County of Suffolk who lost their lives in the Great War, with the exception of the Borough of Ipswich, can now be accessed for free.  (Ipswich was a separate County Borough and recorded the fallen on the Borough War Memorial that was unveiled in Christchurch Park in 1924.)

The volume was compiled using information returned as a result of a circular letter sent out in January 1923 to Parish and District Councils inviting them to send in the names of men and women belonging to or having associations with their parish.  In July 1924 the organisers felt the list of county names was as complete as it was likely to be, as returns had been received from all but three parishes.

Also, a fuller database has been created to include the names of those on the war memorials for three missing parishes (Kirkley, Leavenheath and Wissington) and for Ipswich.  This is available in a series of PDF copies, organised both by surname and by parish.  These can be searched using the ‘find’ function on your browser. 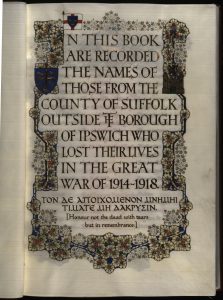