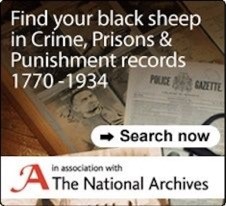 Black Sheep in the Family

On the hottest night of the year to date, more than thirty members and visitors (including two new members) to the June meeting were treated to an informative, entertaining and, at times, amusing journey through a varied range of historical records capturing the misdemeanours of our ancestors.

Always a popular speaker at the Group’s meetings, Gill Blanchard is a professional genealogist, tutor and author of several books, including ‘Tracing Your House History’ and ‘Tracing Your East Anglian Ancestors’.  Her latest publication, ‘Lawson Lies Still in the Thames’, is a biographical novel recounting the extraordinary life of Vice Admiral Sir John Lawson, a native of Scarborough, who died of wounds received at the Battle of Lowestoft.

Gill’s lively talk, ‘Prison and Criminal Court Records’, included many colourful examples gathered from her extensive research in national and local archives, including a cautionary tale about a one-time priest of Stiffkey, Norfolk.  Tried at a consistory court and defrocked for over zealous ministrations to so called ‘ladies of the night’, he first pursued a career as a showman in Blackpool, before joining ‘Captain’ Fred Rye’s animal themed show at Skegness.  Here, he was billed as ‘Daniel in a modern lion’s den’.  The act proved very popular, but it did not end well for ‘Daniel’, who was badly mauled by a lion during an evening performance in July 1937 and died from his wounds two days later.

The Group looks forward to helping you with your family history research, including the guilty pleasure of tracing those elusive black sheep!

Previous: AGM
Next: Tales from the Parsonage